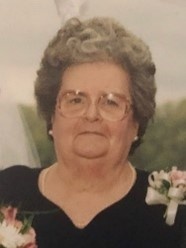 As well as being a loving homemaker, Lillie worked in several different jobs throughout her life including babysitting, working in the orchards, as church secretary, and at Letterkenny Army Depot.

Lillie was truly kind, generous, and cared deeply for people.  She was loved by everyone who knew her. She had a deep faith and strong Christian values.  Growing up music was especially important to Lillie. She enjoyed listening to music, had a beautiful singing voice, and yodeled in her younger days. Toward her later years she enjoyed visits from friends and family and watching the birds and squirrels from her bedroom window.

Friends and family will be received Monday March 8, 2021 from 12 Noon until the time of service at 1 p.m. at the Fair Ridge Assembly of God Church, Shade Gap, Pastor Dan Fox, officiant. Interment to follow at Fair Ridge Cemetery. In lieu of flowers, memorial contributions can be made to UPMC Family Hospice, 20 Sheraton Drive Altoona, PA 16602

To order memorial trees or send flowers to the family in memory of Lillie J. Miller, please visit our flower store.