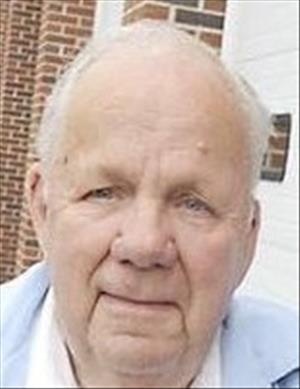 Eberhart, Lewis E. "Mick", 90, Cresson, passed away at the Lutheran Home, Hollidaysburg, on March 31, 2017, surrounded by his loving family. Born April 5, 1926, in Cresson, son of the late Lewis "Bucky" and Caroline (Lilly) Eberhart. Preceded in death by brothers, William, Donald, Tony, and infant Patrick, sister, Janet Mastalski, and infant grandson, Kenneth Jr. Survived by loving wife of 60 years, Margaret "Peg" (McCarty); son, Kenneth (Jackie Vanguilder); daughter, Lisa(fiancAC., Rick Belchick); and granddaughters, Jodi and Abby, all of Cresson. Brother of Rita "Sis" Wilks; and Danny (Flo Sloan), both of Cresson; and Gerry (Kelly), Altoona. Also survived by number nephews and nieces, and his beloved pet, Jack. Mick was a Navy veteran, serving during World War II in the Asiatic Pacific Campaign. He was inducted into the supervisor hall of fame in May, 2009 for 42 years of service, and then was honored by Cresson Township for 50 years of service in December, 2016. He retired from Cresson Township as secretary-treasurer and supervisor in 2016. Mick was a member of St. Aloysius parish, Cresson, and loved spending time with his family, going camping, fishing, and was an avid Pittsburgh Pirates and Steelers fan. He will be greatly missed by all who knew and loved him. Friends received from 2 to 5 and 6 to 8 p.m. Monday at Charles M. Kennedy Funeral Home, Cresson, where Legion of Mary will recite the rosary at 4 p.m. Funeral Mass will be celebrated at 10 a.m. Tuesday at St. Aloysius Church, Rev. Leo Arnone. Committal, church cemetery. Military graveside rite by Cresson American Legion, Sankertown V.F.W. and other local veteran organizations. www.cmkennedyfh.com

To order memorial trees or send flowers to the family in memory of Lewis E. "Mick" Eberhart, please visit our flower store.