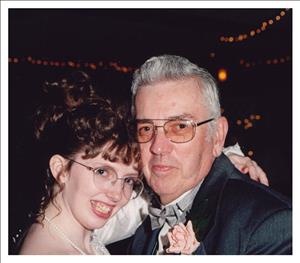 Law, Joseph Charles, 73, Loretto, passed away on Saturday, June 13, 2015, to be with his beloved wife of 52 years, Geneva "Connie" Law. We were blessed to have him as a father, as he was a kind, caring, gentle man who would do anything for anyone. He was so pleasant and even as his health declined, he would smile and chuckle if you said something funny, even on a bad day. He will be sadly missed by his two cats, Sprite and Pumpkin, and also his birds, as he watched them out the window. And he will also be missed by his best friend, Millie Smith, and his caregiver, Angie. Joe is survived by his children who loved him very much: Corey Law (Katy), Alexandria, Va.; Corilee Brumbaugh (Grant), Altoona; and Jody and his dog, BanJoe(Joe's buddy), Cresson. Retired as a health care aide from Altoona Center. Friends received from 4 to 8 p.m. Monday at Charles M. Kennedy Funeral Home, Cresson, where funeral service will be conducted at 11 a.m. Tuesday, Rev. David McCabe. Interment, Cresson Cemetery. www.cmkennedyfh.com

To order memorial trees or send flowers to the family in memory of Joseph Charles Law, please visit our flower store.