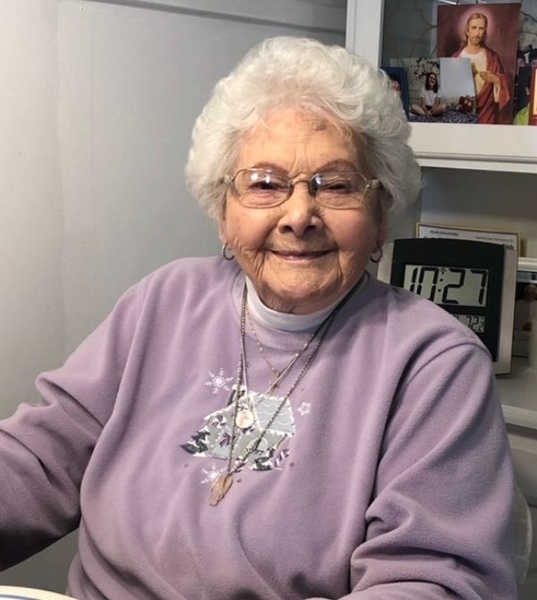 DeVecchis, Jean Arlene (Stump), 102, of 8 N. Washington Street, Mount Union, went to her heavenly reward on Wednesday, September 29, 2021, at 12:30 a.m. at home surrounded by her family. Mrs. DeVecchis was born on September 14, 1919, Mount Union. She graduated from Mount Union High School in the Class of 1937. She married her high school sweetheart, Wilson Robert DeVecchis of Mount Union on August 3, 1937, at St. Catherine of Siena Catholic Church. In 2010, they celebrated their 73rd anniversary. Together they had three daughters, Loretta (DeVecchis) Puchalla and husband, Stanley, West Chester; Trudy (DeVecchis) Lego and husband, James, Mount Union; and Tonya (Tonnie) DeVecchis-Kerr and husband, Bill, Mount Union. Mr. DeVecchis preceded her in death on December 8, 2010. Mrs. DeVecchis resided in her current residence for 80 years, a house planned, designed, and constructed by her husband. The memories that are contained in that home are endless. Jean DeVecchis is Nonnie to six loving grandchildren, Stanley Puchalla, West Friendship MD; Christine Holden, Marietta GA; Robert Kurtz, Mount Union; David Puchalla, West Chester; Douglas Puchalla, Littleton CO; and Jennifer Lego, Mount Union. Eleven great-grandchildren and four great-great-grandchildren survive. A fifth great-great-granddaughter is expected in December 2021. During her lifetime she was an active member of the St. Catherine of Siena Catholic Church and a member of the Catholic Daughters of America. When able, she faithfully attended mass daily. She was a member and past president of the Mount Union Civic Club. Jean loved to play cards, especially Pinochle. She enjoyed spending time with her family and attributes her longevity to the love of family and love of her Church. Jean especially enjoyed her daily phone calls from granddaughter Jennifer and loved to listen to the laughter of great-great grandson, Baker. Her appearance was one of her priorities and she always had an opinion on daughter, Tonnie’s clothing. Jean loved to shop and on her Black Friday shopping trips she would leave her exhausted family tending the packages on a mall bench as she tackled more of the King of Prussia Mall. She had such a spark for life and never labeled herself as old. If someone said go, she was in the car. She was a loving, nurturing, and caring Mom. The void that she is leaving in the lives she touched is great. Jean was especially fond of the caregivers that provided care and love to her during her final years, allowing her to stay in her home. The family has been touched by you and are grateful for your care and love that you had shown our Mom. Special thanks to the UPMC Hospice team for their support and guidance during the past three weeks. Friends and family will be received on Sunday October 3, 2021, from 6 p.m. to 8 p.m. at the funeral home. The family encourages all visitors to please wear a mask. A funeral mass will be held on Monday October 4, 2021, at 11 a.m. at St. Catherine of Siena Catholic Church, Mount Union, Father Joseph Fleming officiant. Interment to follow at St. Catherine’s Cemetery, Shirleysburg. Those who wish may make memorial contributions to St. Catherine of Siena Catholic Church at, 203 W. Market Street, Mount Union 17066. One of the many messages that Mrs. DeVecchis would leave us with is to please get vaccinated to protect each other and rid our world of COVID, that “ugly virus” as she referred to it. Arrangements have been entrusted to Heath-Anderson Funeral Home & Cremation Services, “Honored Provider of Veterans Funeral Care™.” Condolences may be made at AndersonFamilyFuneralHomes.com.

To order memorial trees or send flowers to the family in memory of Jean Arlene DeVecchis, please visit our flower store.