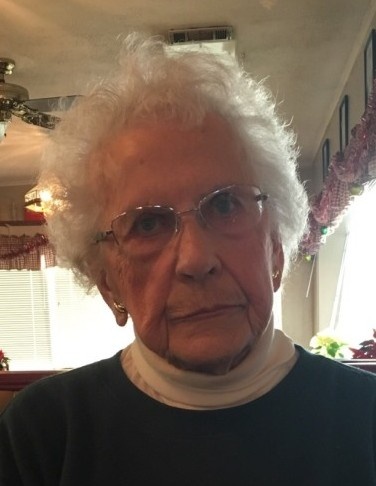 Bell, Hazel O., 93, of Mapleton Depot, passed away unexpectedly December 22, 2019 at her home. Hazel was born on June 4, 1926, daughter of the late John and Edith Yeager. She was preceded in death by her loving husband of nearly 67 years, Vern R. Bell, Sr. Hazel is survived by her children, Robert Bell and wife, Judy; Edwin Bell and wife, Jonnie; 6 grandchildren, Nicole Bell, Angela Port, Stephanie Everetts, Megan Bell, Joseph Bell and Christopher Bell; 10 great-grandchildren; 3 great-great grandchildren; niece, Glenda Bell; nephew, Ron Bell; brother, Earl Yeager; and sister, Mary Wise. Hazel was a homemaker and an active member of the Presbyterian Church of Mapleton. She was a lifetime fan of the Philadelphia Eagles and Phillies and enjoyed watching them on T.V. Hazel was also fond of gardening, cooking, canning, reading and word searches. She loved to spend time with her family. One fond memory was times when she prayed with the girls, she would close the prayer by saying “ok, say Amen, then say, God, make me a good girl.” Friends and family will be received Friday, December 27, 2019 from 10 a.m. until the time of service at 11 a.m., at the funeral home, Pastor Elaine Africa, officiant. Arrangements have been entrusted to Heath-Anderson Funeral Home & Cremation Services, 61 E. Shirley St., Mount Union, “Honored Provider of Veterans Funeral Care™.” Condolences may be made at AndersonFamilyFuneralHomes.com

To order memorial trees or send flowers to the family in memory of Hazel O. Bell, please visit our flower store.