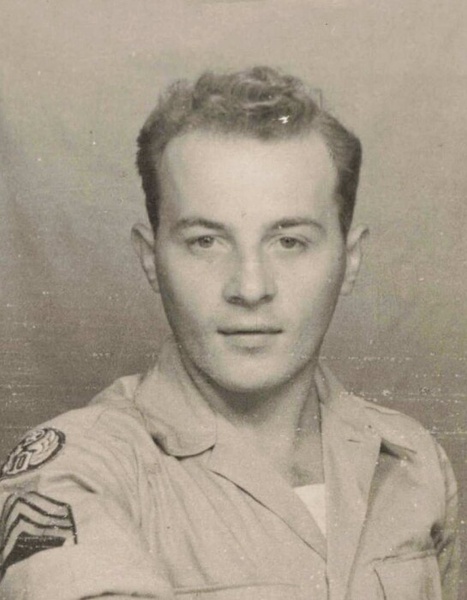 Pollicino, Frank, 97, a resident of the Hollidaysburg Veterans Home, passed away May 17, 2021 at the home. Born September 12, 1923, Ardenheim, Huntingdon County, son of the late Antonio and Catherine (Chila) Pollicino. Preceded in death by his loving wife, Jessie M. (Flasher) on April 4, 2014; son-in-law, Kenny Smith; and siblings, Angela Pasquini, Mary Viola, and Tony Pollicino. Survived by his children, Frank Pollicino, Mount Union; Carol Smith, McVeytown; Cathy Speck and husband, Tim; and Mike Pollicino and wife, Barb; both of Mount Union; 5 grandchildren, Nathan Longacre, Smantha Speck, Ryan Pollicino, Shauna Colbert, and Taylor Pollicino; 9 great-grandchildren; and brother, Leo Pollicino. A hard worker, Frank began taking on jobs at the age of 12 to help his family after the death of his father. At the age of 19, Frank enlisted in the U.S. Army Air Force. He was a member of the 1st Troop Carrier Squadron. Frank flew out of a dirt strip in India to fly supplies over the Himalayans. He earned the rank of Tech. Sergeant and was awarded the American Campaign Medal, Asiatic Pacific Campaign Medal with two Bronze Stars and the World War II Victory Medal before his discharge. After the military, he worked construction jobs around Pittsburgh, where he began a life-long passion of following the Pittsburgh Pirates and attending games at Forbes Field. Eventually he came back to Huntingdon County to work for Harbison-Walker in the lab and stayed until his retirement. He was Italian through and through, always showing a deep sense of family loyalty. Frank enjoyed gardening in his back yard and great cooking. He was a true outdoorsman, relishing spending time at the hunting camp, golfing at the American Legion Country Club, and fishing at Cowan’s Gap. Frank also loved attending his grandchildren’s games. In later years, he enjoyed watching sports on T.V. We were blessed to share many memories with him: Christmas Eve gatherings, summer picnics, many birthdays, and sitting on the back patio. We will miss his sense of humor and his love of life. He absolutely loved his family and was proud to have served his country. We were fortunate to have him a long time. The family is extremely grateful for Home Nursing and all who cared for him at home and then at the Hollidaysburg Veterans Home, where he was treated with dignity and kindness. At the family’s request, all services will be held privately, Joesph Barrett officiant. Burial at Haven Rest Memorial Park, Shirleysburg, with Military Honors provided by the Alexandria Legion Color Guard. Memorial contributions may be made to the American Legion Post 107, 135 E. Pennsylvania Ave., Mount Union, PA 17066 in Frank’s honor. Arrangements have been entrusted to Heath-Anderson Funeral Home & Cremation Services, 61 E. Shirley St., Mount Union, “Honored Provider of Veterans Funeral Care™.” Condolences may be made at AndersonFamilyFuneralHomes.com.

To order memorial trees or send flowers to the family in memory of Frank Pollicino, please visit our flower store.