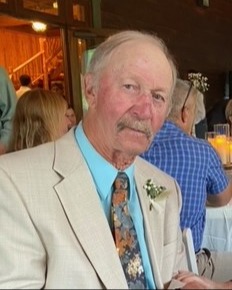 David Reeder Saulen, 79, Mount Union, went to be with his Lord and Savior on Monday October 10, 2022, surrounded by his wife and three children following a brief illness. Born April 29, 1943, son of the late John and Pauline (Reeder) Saulen. Preceded in death by his brother, Marty Saulen and cousin, Harvey Bruce Reeder. Survived by his loving wife, Mary; children, Lisa Abernethy of Smithmill; Andrew Saulen of Tampa, Florida; and Melanie Saulen of Williamsburg; 7 grandchildren, 3 great grandchildren; stepchildren, Karen Farleman and Allen Clark; 5 step-grandchildren and 3 step-great-grandchildren. David graduated from Captain Jack High School in 1961, attended Juniata College and graduated from Shippensburg University in 1966. While in college, David was a member of the golf team and Sigma Tau Gamma Fraternity. In high school and college, David worked at the A&P grocery store. He began his teaching career in the Mifflin County School District and then at Mount Union Area School District until his retirement in 1997. He taught social studies and became the Junior High Guidance Counselor. David also helped by coaching the high school golf team. In the 1970s, David became a master fly tier, selling to Orvis, the Latrobe Fishing Club, numerous other shops and local fishermen. David enjoyed hunting, fishing, golfing, walking his beagles, hunting for golf balls, and woodworking. David was an active member of the Cedar Crest Independent Baptist Church and often did maintenance tasks around the Church. David was also a long-time member of the American Legion Country Club. He was a member of the F&AM Lodge #688 in Mount Union. He was always willing to help others whenever needed. David was a loving husband, devoted father and grandfather, and lived life to the fullest. Friends and family will be received on Sunday October 16, 2022, from 6 p.m. until 9 p.m. and on Monday October 17, 2022, from 10 a.m. until the time of service at 11 a.m., at the funeral home, Pastor Barton, officiant. Interment to follow at Mount Union Cemetery.  Arrangements have been entrusted to Heath-Anderson Funeral Home & Cremation Services, 61 E. Shirley St., Mount Union, “Honored Provider of Veterans Funeral Care™.” Condolences may be made at AndersonFamilyFuneralHomes.com.

To order memorial trees or send flowers to the family in memory of David Reeder Saulen, please visit our flower store.